Below are articles about Ratio Christi Rutgers (RC RU) that appeared in Rutgers University publications:

Using the books of Mark, Matthew, Luke and John, Timothy McGrew explained “undesigned coincidences” and how small reoccurring details can support biblical text as a source of reliable information.

Western Michigan University’s Philosophy Professor Dr. Timothy McGrew spoke to students via Skype this past Thursday at the College Avenue Student Center to speak about how multiple recounts of the same biblical events support the belief that these events happened.

The event, “Undesigned Coincidences,” is named after the term McGrew coined to discuss the historical credibility criteria he uses to assess text. These “undesigned coincidences” occur when missing information from one biblical reading is reinforced by others, thus linking together multiple sources and lending credibility to authors of the Bible.

Julie Miller, the director of the Rutgers chapter of Ratio Christi, said McGrew drew from seven different examples. Using the books of Matthew, Mark, Luke and John he helped credit Gospel writers and dispel disagreements that these texts were created to deceive people. Ratio Christi is a Christian apologetics group on campus that presents the Christian belief while opening the door to further philosophical and religious discussions.

“Undesigned coincidences” highlight the best intentions of these writers, Miller said. Aside from external findings, McGrew pointed to internal evidence within the writings to support two of the group’s main questions when investigating the Bible’s reliability.

“First, are the documents we have what the authors wrote? The discipline of textual criticism is the source for this answer,” Miller said. “Any ancient text is submitted to textual criticism, and at Ratio Christi, we had already covered this evidence in our group, so we were interested in the second question, which is, did the authors know the truth about the events they describe and did they honestly present the facts?’”

One reason the group believes the Gospels are a result of eyewitness testimony is the number of “undesigned coincidences” found across them, Miller said. Small details that would otherwise be omitted reoccur throughout multiple readings, highlighting events like the miracle of Jesus.

This event is the third in a series of guest lectures Ratio Christi has held throughout the semester, working students into conversations about artificial intelligence, Mormonism and in the coming spring, a look into how former President Abraham Lincoln’s faith shaped his decisions throughout the American Civil War.

Away from making claims about Christianity, the group is open to answering objections from those who disagree, Miller said. McGrew’s presentation is one-way Ratio Christi responds to beliefs that Gospel stories are fabricated.

Miller said taking an in-depth look at these controversial topics helps to contextualize them.

Ratio Christi encourages others to challenge their own beliefs and build questions around what they think is true, she said.

“We welcome everyone. We want to have open discussions about the big questions of life, but we do present the Christian worldview,” Miller said.

“This club is unlike a lot of Christian organizations,” he said. “What we try to do is go deeper into the study of the Bible. I guess you could call it advanced-advanced bible study because it’s important to read the Gospel, but it’s also important to ask the questions and wonder why the Bible says what it says and why we believe what we believe.”

Anderson said he regularly returns to weekly meetings with the knowledge that on any given day he will leave having learned something new.

Temitope Ali, the vice president of Ratio Christi and School of Arts and Sciences senior, said a lot of people have these ideas stirring inside their minds but have yet to express them. In many instances, people ignore their questions and adopt Christianity because their friends have.

“All of these questions don’t get brought up in regular conversation because you have two taboo subjects, politics and religion,” Ali said. “So our events help people to reconcile those questions as like an appropriate space for those questions to be asked and answered.” 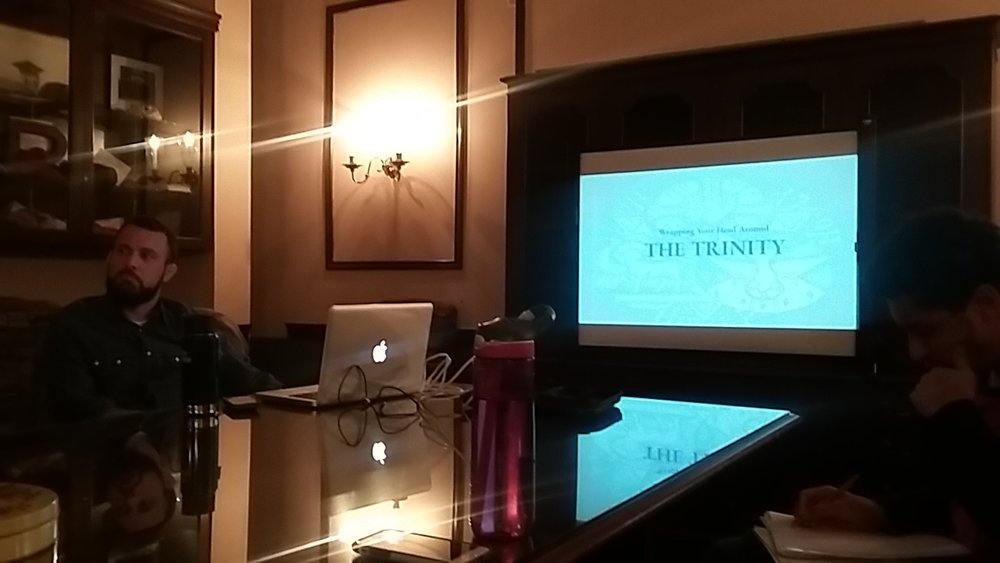 Rutgers is a public university, and therefore cannot establish an official religion. For that reason, it is easy to lose sight of the school’s original Christian roots. As a reaction against this theological vacuum, many have voiced the desire to to bring Christianity back into college life.

Now, there is a organization devoted to just that.

It’s called “Ratio Christi” (Latin for “The Reason of Christ”). Their chapter at Rutgers is one among more than a hundred worldwide.

As their main website describes, they are not backing down on their goals:

We want to re-establish a strong and reasoned presence of Christian thinking in academia. Our goal is to place apologetics clubs at all major universities.

Ratio Christi wants students to be “Fully Equipped and Fully Engaged.” We want to help students hold onto their faith and to also begin to stand up for Christianity when it comes under fire on campus. We desire to train students to be conversational evangelists who will in turn train others to defend and proclaim the Gospel.

Julie Miller founded the Ratio Christi Rutgers Chapter in the fall of 2011, and she remains a chapter director to this day. They meet every Tuesday at 12:00 PM and every Thursday at 8:00 PM in the College Avenue Student Center (in the Atrium Conference Room or Room 413, respectively). Individual meeting topics have included a wide variety of hot-button issues, ranging from Artificial Intelligence to Slavery to Free Will.

“The primary purpose of the club  is to engage in discussion on the big questions of life in a constructive manner.” said Vas Avramidis, who was a regular speaker for the club until officially joining Miller as a chapter director two years ago. “We want to create a space for open dialogue.”

Avramidis is excited about the club’s future prospects. For example, this upcoming March, Dr. Joseph Fornieri, a world renowned scholar on the presidency of Abraham Lincoln, is coming to speak about the historical significance of Christianity.

Hannah Fitzgerald, a Rutgers student studying industrial engineering (Class of 2019), is grateful for having joined: “What is an education if you don’t know why you believe what you believe about your own existence? My studies at Ratio Christi over the past three years have given me an entirely new perspective on the Bible and the truth about God.”

Ratio Christi invites Joseph R. Fornieri to Rutgers for a look at Lincoln’s personal philosophy and biblical interpretation of slavery

Slavery, religion and politics were all analyzed through the scope of American history on Tuesday night at a presentation hosted by Ratio Christi, a Christian-student group at Rutgers.

Joseph Fornieri, a professor of Political Science at the Rochester Institute of Technology (RIT) and the special guest, delivered his presentation on “Lincoln, the Bible, and the End of Slavery.” Fornieri is RIT’s director of the Center for Statesmanship, Law, and Liberty, and has published many works detailing the 16th president of the United States, Abraham Lincoln.

“I gave the Ratio Christi group a presentation on Lincoln and the Bible, one of my areas of expertise,” he said. “Today we looked at how the Bible was invoked by both sides of the Civil War and how Lincoln’s greatness as a statesman involved his ability to speak to a Bible-reading public.”

Fornieri’s latest book, “Abraham Lincoln, Philosopher Statesman,” deals with the topic of biblical Republicanism, which Fornieri defined as “Lincoln’s ultimate moral justification of American self-government in public life that appeals to the moral authority of the Bible and the (founding fathers’) Republicanism, their belief in self-government.”

He said that Lincoln’s rejection of slavery and racism was based on three tenants: Revelation (the Bible), Republicanism (self-government) and reason. Fornieri said he was excited by fresh discussions on the subject, and was heartened by new efforts to not overlook religious significance in the public discourse around slavery.

Fornieri used extensive primary sources to support his claim. The majority of his presentation dealt with comparing the biblical arguments made by Lincoln against those made by Confederate President Jefferson Davis.

The irony, as Fornieri initially said, is that both sides were of the same religion yet used it to support different causes. Lincoln too pointed this out in his 1865 Second Inaugural Address.

He said, “Both read the same Bible, and pray to the same God; and each invokes His aid against the other,” according to The Atlantic.

Backers of slavery at the time would often use Old Testament verses to support their cause, such as Exodus 21: 20-21, Fornieri said. The verse said, “Anyone who beats their male or female slave with a rod must be punished if the slave dies as a direct result, but they are not to be punished if the slave recovers after a day or two, since the slave is their property,” according to his presentation.

Davis also used the Genesis story of The Curse of Ham, or The Curse of Canaan, which is a myth explaining the existence of races, to further his ideology, Fornieri said. The myth said, “It is enough for us that the Creator, speaking through the inspired lips of Noah, declared the destiny of the three races of men,” according to his presentation.

He then discussed how Lincoln used Bible verses to dispute slavery. Those included verses like Genesis 3:19, which said, “In the sweat of thy face shalt thou eat bread, till thou return unto the ground; for out of it wast thou taken: for dust thou art, and unto dust shalt thou return,” according to his presentation.

Fornieri said that opponents of slavery interpreted this as suggesting that all men are equal in the eyes of God, and that all men come from and will return to dust. Therefore, one person should not have absolute power over another. Invoking this passage, Lincoln called slavery “a double-refined curse of God upon his creatures.”

Fornieri concluded his presentation by briefly discussing new charges against Lincoln that accuse him of racism, but Fornieri dismissed these charges. He said that Lincoln’s extremely uncommon progressive ideals for the time and his friendship with Frederick Douglass, a freed slave and famous abolitionist, demonstrate otherwise.

Host of the event, Ratio Christi, is a worldwide Christian-student group, said Hannah Fitzgerald, the president of the Rutgers chapter and a School of Engineering junior. The chapter is eight years old and has about a dozen members. It hosts similar large, public events once a semester, and holds two weekly meetings in which members present on a variety of religious and philosophical topics.

She said that on any given week the group has more non-Christian attendees than Christians. Ratio Christi has had atheists, philosophy students, Buddhists and Muslims all attend its events.

*For the record, we at RC RU think the author could have done a better job of summarizing the main points of Dr. Fornieri’s talk, but we were happy for the press either way, and Hannah Fitzgerald’s quote at the end of the article is great.